Correlation matrices show up often in papers and anywhere data is being analyzed. They are useful because they succinctly summarize the observed relationships between a set of variables; this also makes them very good for exploratory data analysis.

This data can also be displayed visually, in a color-coded matrix. Here is exactly the same data, displayed in visual form: 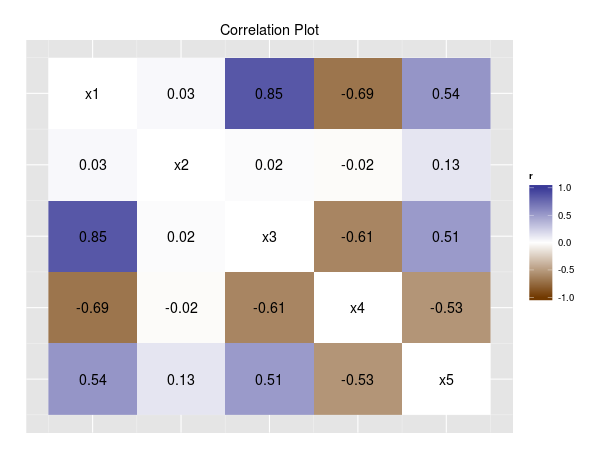 In particular, this improves on Tufte’s 6th and 7th principles of data graphics: encouraging visual comparisons and “reveal[ing] the data at several levels of detail” (page 13). It is much easier to compare the correlations of different variables visually than by doing mental arithmetic to compare the numbers in the correlation matrix. The correlation matrix also presents the data only at a high level of specificity. The visual display, on the other hand, uses colors to display the general patterns in the data, while still having the numbers to diplay the specific relationships.

This idea can be executed in many different data analysis environments, but I use R. The R code used to produce the above plot follows. Calling the function corplot on a data frame will create and display the plot, and return the correlation matrix.