I’m an assistant professor in the Department of City and Regional Planning and Odum Institute for Research in Social Science at the University of North Carolina at Chapel Hill. I blog here about transportation, land use, software development, and the intersections between them.

Learn more about me

Regular $2, for you $3: when a discounted transfer is not a discount

Oftentimes there are discounts for transferring between transit routes. For instance, in Boston, when you pay $1.70 to ride a bus, you get a $1.70 discount off the subway fare and only pay $0.70 instead of $2.40 when transferring. In Suffolk County, New York, once you pay $2.25 for a bus, you save $2.00 off the next bus fare (you have to pay $0.25 for a transfer slip). Most transit systems rely on transfers, and this is a good thing, but to make such a network work without thumbing your nose at riders, you have to provide free transfers.

So far, so good. We discount subsequent rides after riding the first vehicle to make the system more efficient and to not penalize riders who don’t happen to be traveling somewhere where they can get in a single ride. Sounds like a good plan.

But the road to hell is paved with good intentions. In some cases, these discounted transfers are actually negative: that is, after riding some set of transit vehicles, it is actually more expensive to ride the next set than it would be if there were no discounted transfers. Here are three examples:

So what, you might say. Certain trips cost a bit more than they would if you did something tricky with losing your transfer slip. Maybe a few folks have figured this out and have two electronic fare cards that they use for different parts of the trip, and others just pay a bit more than they truly have to for trips. This isn’t necessarily unjust—it depends on who is making these trips.

But it is a problem for the algorithm Anson Stewart and I developed for finding the lowest-cost trips. One of the assumptions in that paper is in equations 4 and 5, where we assume that transfer discounts are nonnegative. At the time we wrote the paper, we assumed that to generally be true, and just noted that some trips with these edge cases could be missed by the algorithm. But now it seems that such negatively-discounted transfers are actually fairly common.

I see three possible courses of action. One is to just not worry about this problem, and assume that trips where it comes into play are strange, and it’s okay if the algorithm doesn’t always find the cheapest trip in these cases. Another is to implement code that figures out when it is advantageous to discard a transfer allowance, and does so. The final way is to remove the nonnegativity assumption for transfer discounts in the algorithm.

I don’t think teaching the algorithm to discard transfer allowances when it is advantageous to do so is a good option. Most system users just scan their smartcard when they board and don’t do a lot of math to figure out if a complex, ad-hoc combination of multiple fares would yield a cheaper price. Furthermore, agencies probably don’t want to base equity analyses on fare rules that require riders to do something tricky with multiple smartcards. I’m a PhD candidate in transport geography, and I’ve spent a lot of time thinking about fares, and I’ve only just figured these out. Agencies can’t base their analysis on requiring that people go through months of mathematical gymnastics to save a few bucks.

Just not worrying about it is probably appropriate in most systems, where these trips are quite rare. However, if they are common, removing the nonnegativity assumption may be warranted. This is not that difficult, although it will reduce performance as more paths will be retained.

Making this change will mean that when there are negatively-discounted transfers, the algorithm will do everything in its power to get rid of them, for instance by riding random buses one stop just to use up the remaining value. Consider this example:

This is a Pareto surface. Along the x axis is travel time, and along the y axis is travel cost. The points on the plot are all the Pareto-optimal options for bus travel between 3rd Ave and E 180th St in the Bronx and Lower Manhattan. That is, there are no options that are both faster and cheaper than any of the options on this surface. Express buses are shown in bold.

Let’s consider the two options tied for fastest, which are shown in red. They both take the Bx9 local bus and transfer to the BxM10 express bus at Morris Park Ave/E 180th St and then to the SIM111 to get to lower Manhattan. However, the cheaper option adds a short ride on the Bx36, so that two local buses have been ridden and the transfer allowance has been cleared before boarding the express bus. The two options are on a map below, with the added ride on the Bx36 shown in red.

The algorithm as it exists does not find the cheaper path in this case, because at the boarding stop for the express bus, the cumulative fare paid for the cheaper 2-bus option is $2.75 and the maximum transfer allowance is zero. Since the cumulative fare paid for the more expensive option is also $2.75, Theorem 3.1 concludes that the 2-bus option cannot yield a cheaper trip, and prunes it. To produce the Pareto surface, I had to modify the algorithm to disable Theorem 3.1, and not consider having a transfer allowance to be better than not having one in Theorem 3.2.

Since the router is finding trips that are Pareto-optimal in terms of time and fare, it will retain both trips if the more expensive one is faster. In this case, the router can sneak in an extra bus ride without missing the express bus, so the cheaper option has the same travel time.

I’m not sure it’s worth the trouble to support these negative transfer allowances properly. In the same vein as not basing our analysis on people doing tricky things where they intentionally discard their transfer slips, I’m not sure we should base our analysis on assuming people will do things like ride a bus one stop to consume their transfer allowance. Even without modifications to the router, it will sometimes find these cheaper trips that come from using negative transfer allowances—for instance, if the two options do not board the express bus at the same stop, they will not be compared—so not handling these edge cases can create some inconsistencies in terms of whether the absolute cheapest trip is always found. But I would argue these inconsistencies are minor enough that they can be ignored in most cases. 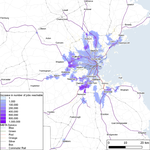 In my previous post, I analyzed the effects of a proposed bill in California that would dramatically upzone areas around transit stations, allowing for increased housing production, albeit potentially creating opposition to transit projects.
Matthew Wigginton Conway
Jan 13, 2018 7 min read

Will Rezoning Around Transit Stops in California Undermine Support for Public Transit?

Here we are early in 2016, and I decided it was time to revisit how I publish my writing. I’ve had a blog for a while, but I’ve recently been realizing that the future is social, and my ideas would be easier to share if they were hosted on a social platform.
Jan 24, 2016 1 min read

Urban planning is the process by which society decides how our cities and regions will develop in the future. As anyone who’s been involved in a planning process can tell you, it is a very difficult field.
Jan 24, 2016 5 min read
See all posts

I’m a PhD Candidate in Geography, at the School of Geographical Sciences and Urban Planning at Arizona State University. My dissertation research focuses on understanding how changes to zoning codes will affect transportation outcomes. I am taking a simulation approach, building a microsimulation model to forecast the transportation impacts of these zoning changes.

From 2014 until 2017, I was as a Project Manager and Software Developer at Conveyal, a transportation consulting firm, where I worked on accessibility planning. I developed new algorithms to rapidly compute accessibility metrics for public transit systems, worked on implementing those algorithms on a high performance computing cluster with a user-friendly web interface, and worked with clients to apply those metrics to their transit projects.

Before joining Conveyal, I was a fellow in the Data Science for Social Good program at the University of Chicago. Here, I worked on a project to identify abandoned homes from administrative data, and to evaluate the effect of home abandonment on surrounding property values.

I received a bachelor’s degree in Geography from the University of California, Santa Barbara. I focused on transportation and quantitative/computational geography, and undertook several transportation research projects. Before that, I attended Foothill College.

My full CV is also available.